This page summarises some of the trading strategies that I use in the high implied volatility environment.

The low implied volatility environment is defined as stocks or indexes with Implied Volatility (IV) Percentile or IV Rank lower than 25. I only use high volatility strategies when IV percentile is higher than 25. When it gets lower than 25, I would consider implement low volatility trading strategies as well depending on the market situation. So there is a 5 points overlap between the strategies.

Typically, they are one standard deviation out of the money (68%). In other words about 0.15 Delta for each side so combined probability of losing would be about 30%.  The idea is to set up the Credit spreads far out enough on each side so they would expire worthless with a high probability of success.

This might sound like a “dream comes true” setup, but in reality it has several drawbacks as discussed below.

Also, instead of letting it expire, taking the money off the table after hitting certain target (for example, 35% of the maximum profit) would be an ideal move in many cases.

1) It needs to have enough open option interests

Not every underlying securities have large open option interests out the money so this would limit the number of candidates. Indexes such as SPY, SPX, QQQ are good candidates. 2

Since we are selling options to get credit, we want to take advantage of high implied volatility because it would make options more expensive. As the volatility drops, it would help is getting closer to the target price.

One of the most confusing aspect in options trading I found is the name used for strategies. In some cases, different names are used for essentially the same strategy. Chicken Iron Condor is one of those strategies.

Essentially, by moving the Call and Put options sold closer to the underlying security’s current price, it creates a narrower and taller return curve.

This strategy is a good alternative to selling Straddle if your trading account (also an IRA account) is not permitted to sell unlimited risk options. Some people refer this to a Synthetic Straddle because of the risk / return earning curve it creates is exactly the same as Straddle yet with limited risk.

I personally use this in IRA accounts and for Straddle trades that would require way too much margin.

Here is the link to Wikipedia about Iron Butterfly.

Is Iron Butterfly as good as Straddle?

Studies done by Tastytrade shows that Straddle is a better choice than Iron Butterfly in the high IV environment.

So the message here is that, if selling Straddle is an option, choose that instead of Iron Butterfly. 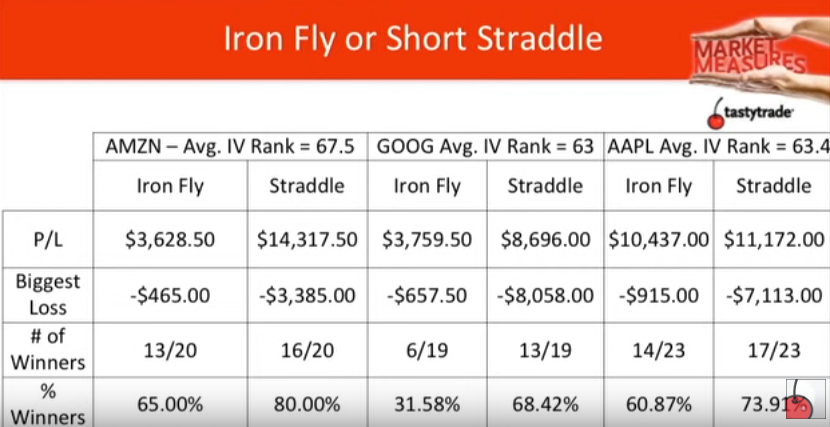 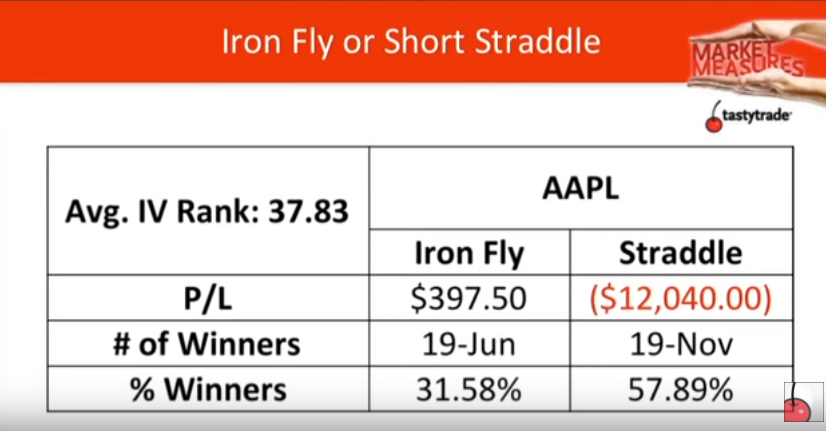 This strategy is only limited to accounts that can execute unlimited risk options trading such as selling naked Call. You would need to apply for an approval from your brokerage firm.

Instead of buying an out of the money Call and Put options to create a limited risk trade, this strategy would only sell Call and PUT to create a pyramid like risk to return graph. As you can see from the image below, it could look pretty scary because of the unlimited downside risk.

However, by eliminating the need to buy out of the money Call and Put, it not only making the trade gets executed more easily and save some transaction cost, it also widens the break even points a little wider and reaching to the target exit point little easier.

I personally only use this when there is a very high IV Percentile. Ideally above 80%.

When to sell Straddles?

Based on the studies done by folks at Tasteytrade.com, this strategy should be carried out ONLY when Implied Volatility is at least higher than 50%. In fact, if you watch this video, it explains that out of the money strangle should be used instead of in the money strangle when there is a low volatility. 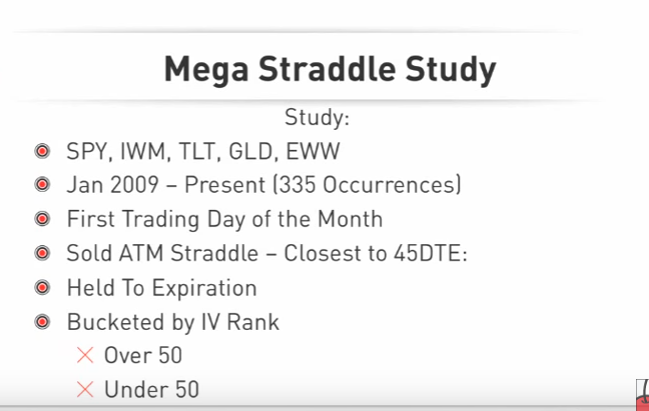 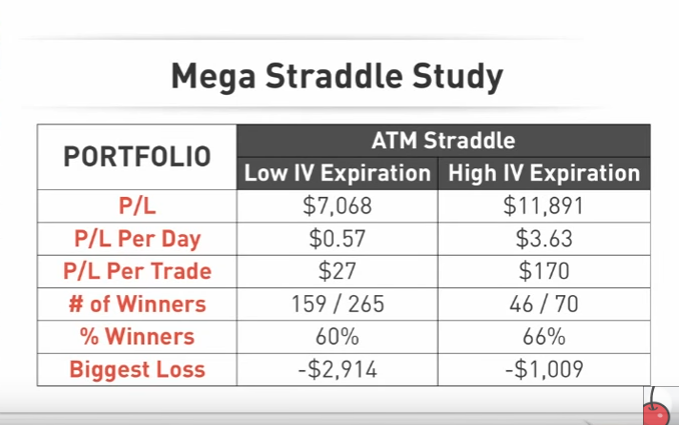 How to manage Straddles

A screenshot from this Tastydtrade video shows the expected Straddle trade return based on the days held.

This table could give you a baseline to compare with in case you wonder if you should get out of a trade after certain days.

For example, after 10 days of entering a Straddle trade, you are seeing 20% profit. This is a much better return than what’s shown in the table so if you want to get out of the trade, you should. 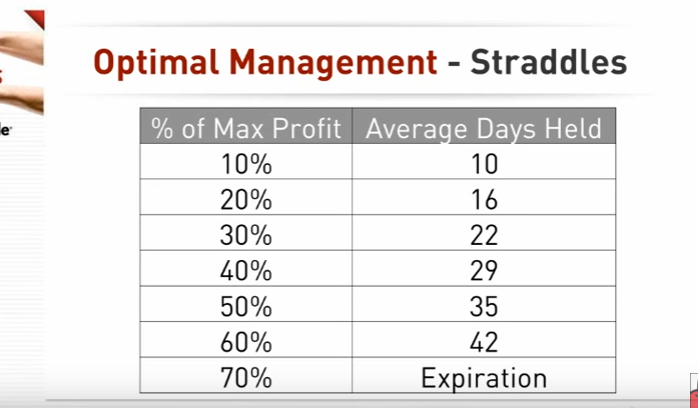 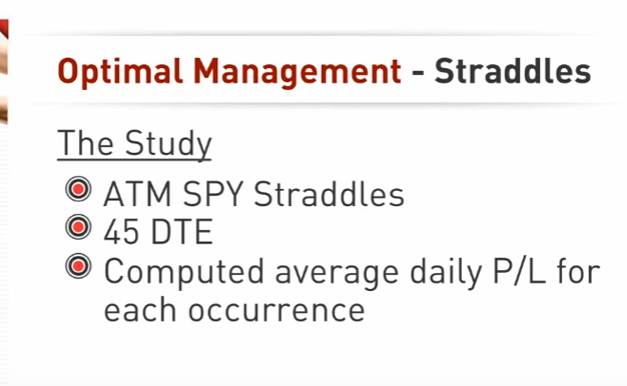 This is essentially the unlimited risk version of Iron Condor.

WHY THESE STRATEGIES SHOULD NOT BE IMPLEMENTED IN LOW IV ENVIRONMENT

A study done by Tastytrade shows that simply the strategies mentioned on this page are better in the high IV environment. 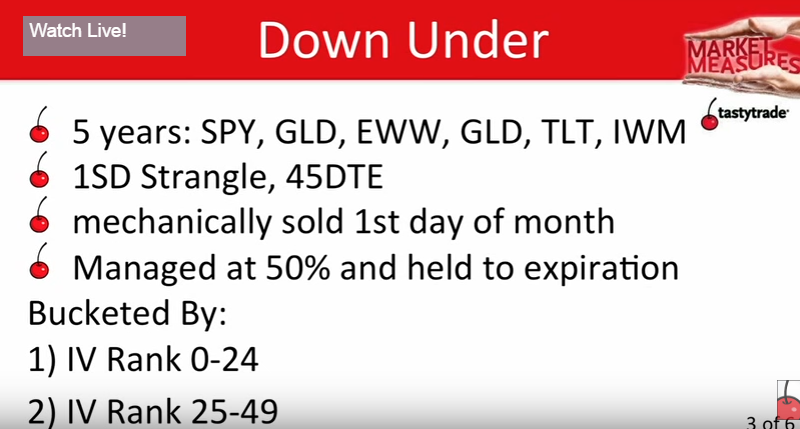 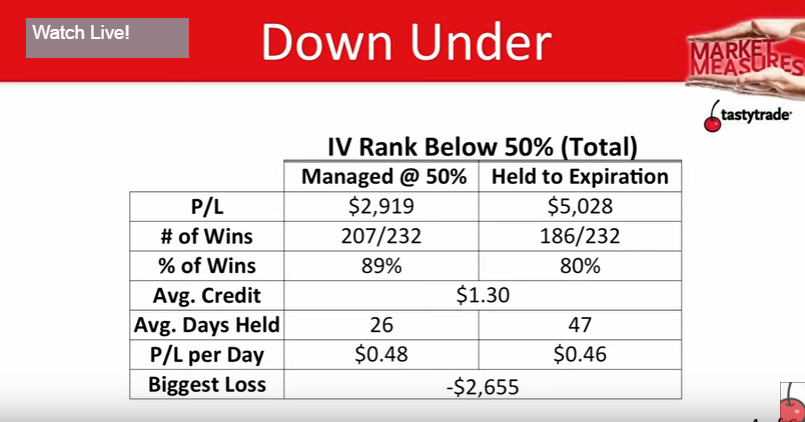 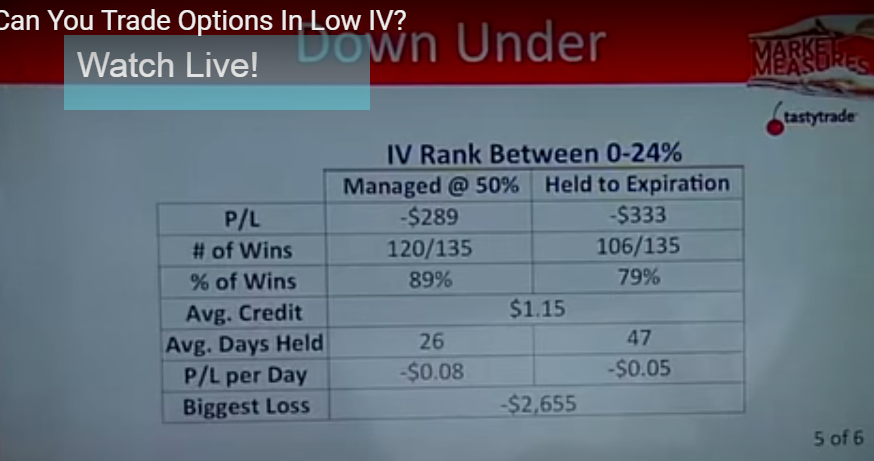 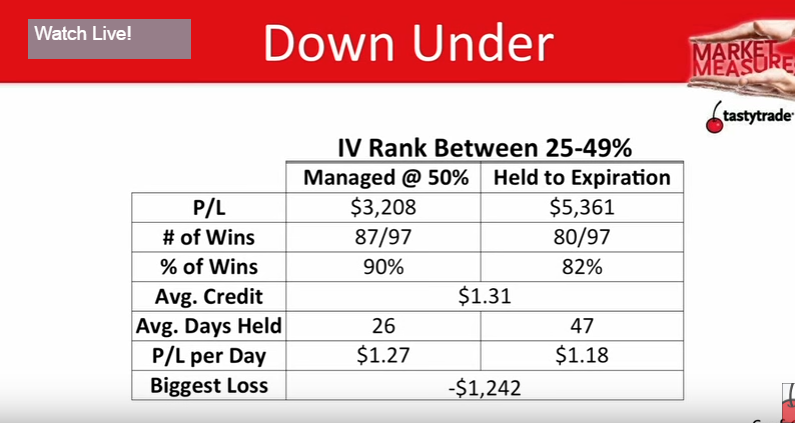 This Tastytrade study shows the difference between Straddle and Strangle in terms of expected return based on days held. 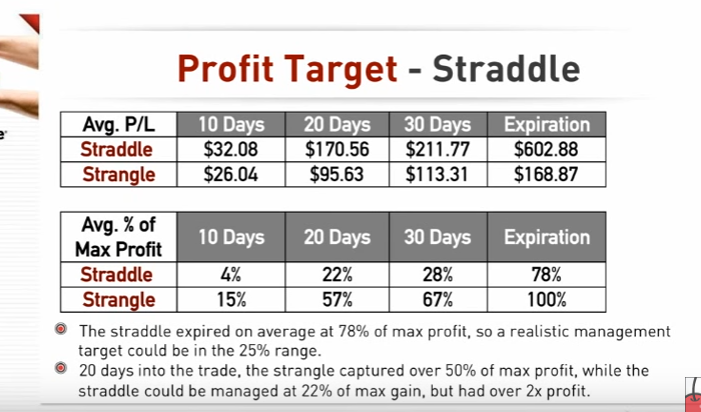 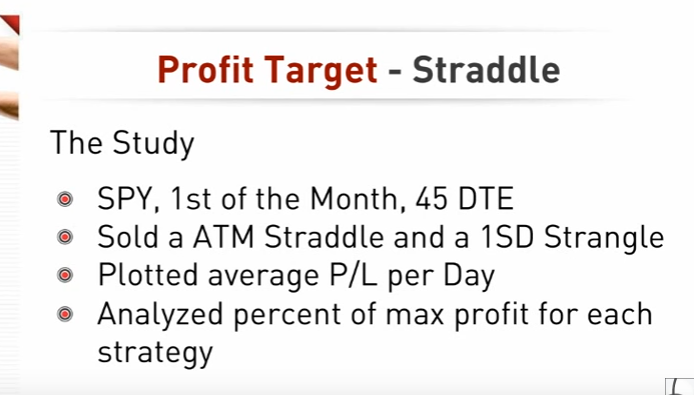 HOW TO MANAGE THE WINNERS (WHEN TO GET OUT OF A TRADE?) 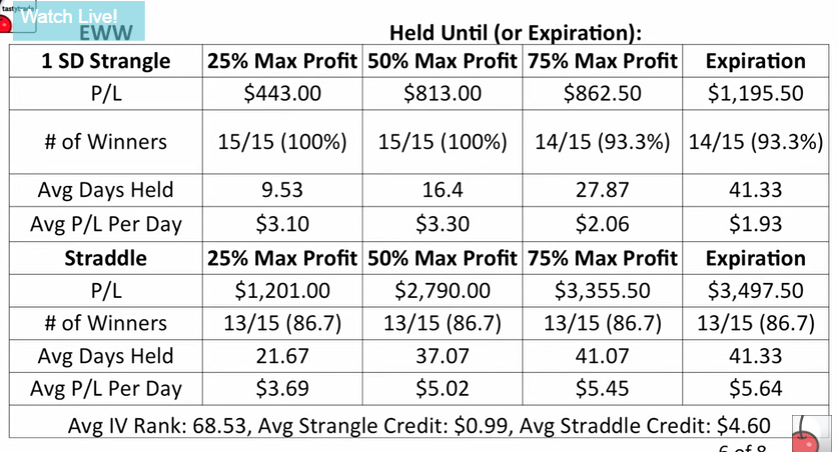 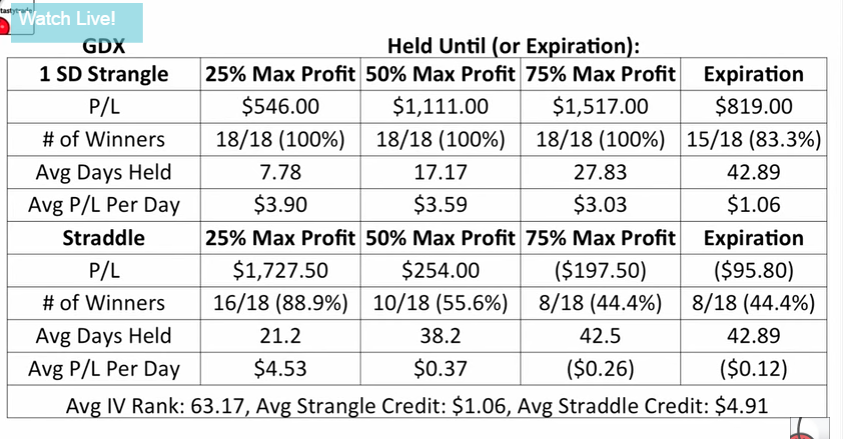 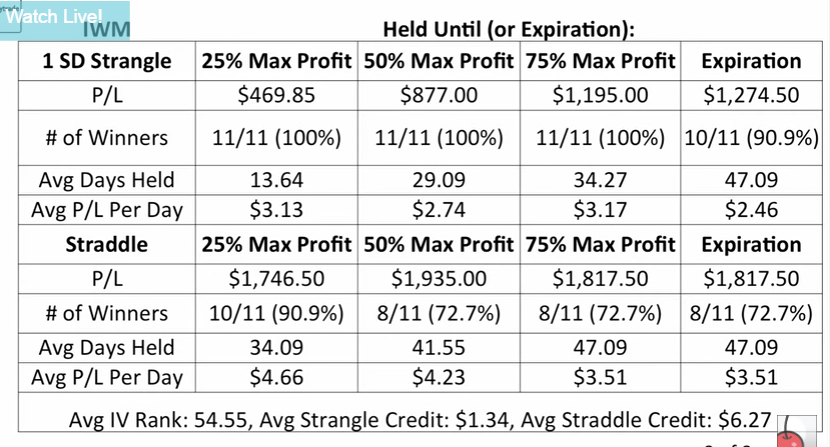 VIX is constructed using the implied volatilities of a wide range of S&P 500 index options. It is also known as the “fear gauge” of the market because it shows the market’s expectation of 30-day volatility.

The tricky part of trading VIX option is because its underlying security is based on VIX Futures and it’s a European style option. What I also found is that VIX options that are a month or a few months out do not increase or decrease as much. It is more effective to trade UVXY and VXX if there are substantial open interests.

Some people argue that buying VIX PUT option is more effective, however, I would argue to sell CALL spread option instead.

Make sure to give it enough time (45-60 days) to revert back to the mean. I made a huge mistake selling UVXY CALL spread with only about 20 days to expiration. It turned against me and touched the exit point THE WEEK after the expiration!! In other words, the options expired on Friday and the price literally hit the exit target on the following Monday!! NEVER, EVER trade VIX, UVXY, or VXX too close to expiration, unless you plan to really actively manage the positions.

The following videos that I found on Youtube explains pretty well about how VIX options work.

VVIX: Volatility index of the VIX