It seems the market condition has really started to change. S&P 500 continues to move higher while Russell 2000 is moving sideways. The clear divergence between S&P 500 and Russell 2000 indicates people are starting to care more about risks and moving the money away from the small-cap companies. Additionally, the Chinese government started changing its policies on tech-related companies has caused China-related stocks to plummet. As a result, my account value declined in July due to unrealized loss, even though the account did produce realized profit for the month.

This is a really good lesson on how changes in political policies could have devastating effects. Despite the fact that fundamental analysis shows a much higher valuation of these Chinese companies, the current stock price is far from reflecting that fundamental data. For example, YY has $60 worth of cash per share according to finviz.com, yet its stock price is around $45 today (8/12/2021).

There was a “blank” sector because I am still holding a hedge position using an ETF and it doesn’t belong to any particular sector.

Generally speaking, I do not intentionally choose any particular sector to open the Wheel Strategy positions, but rather I choose them primarily based on higher Implied Volatility when they pop up on my screeners.

The July monthly profit was about $118 so approximately 2% return using the initial account value of $5,095 at the beginning of the month for the calculation. 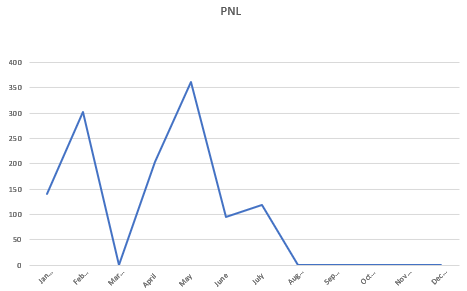 Thoughts for the July Report

While the Chinese government’s move on changing its policies towards the tech sector was unpredictable, the reason my account suffered unrealized loss is largely due to my lack of focus in July. My health and mental state haven’t been very stable. In fact, I am suffering from low back pain that shoots all the way down to one of my legs as I am writing this post. This pain has been going on and off since early July.

One thing I realized with options trading is that it is very similar to playing sports at a professional level. Keeping a top-notch physical and mental state is a must if one wants to succeed in trading. I have started practicing meditation but have not been very consistent and my exercise routine needs a revisit now that I am having this low back pain.

Aside from improving the physical and mental aspects of my life, I also need to work on market analysis. I recently published a post about Market Sentiment Analysis and it really opened up new ways for me to look at the market. One of the data I found, historically, the stock market underperforms in August and September. This could mean the Wheel Strategy profit might dwindle in the next couple of months. In anticipation of this, I have started looking into ways to hedge the downturn other than just shorting SPX or IWM with a Credit Call Spread or a Debit Put Spread.

It’s still too early to tell if I would be able to find something meaningful at this point. I plan to share the findings once I have gathered enough data.

In any case, the account is still growing YTD. Trading is like riding a wave, it goes up then it goes down. This is the way.