After a relatively volatile month of May, in June, I decided to scale back and wait for the market to pull back because some indicators were showing potential signs of market weakness.

How wrong I was. The market kept going up and I missed some upside opportunities by being on the sideline. Not only that, I decided to open some positions to hedge the potential market downturn and that did not pan out very well either.

Upon realizing my mistake, I jumped right back in when there were minor pullbacks in the market and deployed the free capitals that had been sitting on the sideline to work. It will be interesting to see if this move will yield a good return in the July report.

Nonetheless, despite my wrong prediction about the market, overall the account did continue to grow in the month of June.

There were some “blank” sectors because I initiated hedge positions using ETFs and they don’t belong to any particular sector. These hedge positions are simple debit or credit spread using Call and Put.

I did not intentionally choose any particular sector to open the Wheel Strategy positions, but rather I choose them primarily based on higher Implied Volatility when they pop up on my screeners.

The June monthly profit was about $96 so approximately 2% return using the initial account value of $5,025 at the beginning of the month for the calculation. 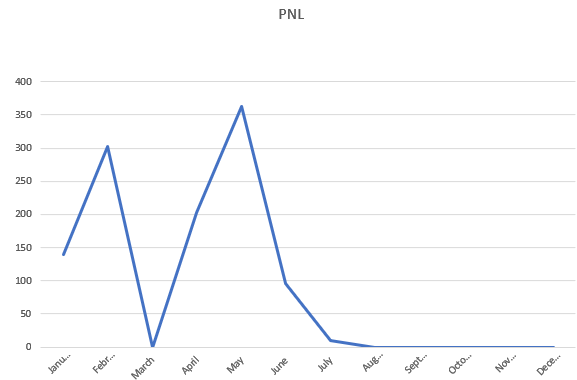 Thoughts for the June Report and What’s Next?

While it went pretty well for June, as I am writing this in mid of July, the Russell 2000 index is in decline again and many of my positions are affected because the majority of the underlying for my options positions are small companies.

The hedge position that I opened (a Call Credit Spread) with the SPX is in red because larger companies are holding up pretty well, especially technology-related companies.

Also, based on my historical trading performance, I am absolutely horrible when it comes to credit/debit spread. I know hedging is like buying insurance so I should not try to profit from my hedge positions. However, nobody likes to lose money even if it is meant to be lost.

I will likely stop doing the hedging strategy and just limit the number of positions that I open and keep more free capital when there is a potential market decline, then jump back in when the market hits the bottom and start its recovery.

Stock Market Sentiment Analysis – Why Care About It?
Scroll to top