October as it turned out was a very volatile month. The market dropped substantially at the beginning of October then recovered with multiple price gap up days in SPX. While it was a profitable month, I did make the mistake of putting on a hedge position too early after the market started recovering. The hedge position was selling a Credit Call Spread, essentially shorting IWM. There were so many signs indicating that I should have got out after a few days (both price movement and sentiment data saying the market would keep going up), I held on to it and ended up closing it at a loss in early November.  So likely we will see a negative month in the November monthly report. 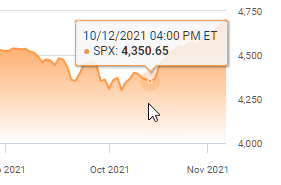 My positions are skewed towards Health Care and Information Technology related stocks. This makes sense since I look for high IV opportunities for the Wheel Strategy.

In addition to the Wheel Strategy, I started shorting VXX in this account as well. I normally only short VXX in a large margin account because I can open naked short Call easily, whereas, in a small account, I would need to short VXX with Credit Call spread, which costs more commission and is not as easy to get in and out. However, the market drop in October triggered a large spike in VIX so it was a good setup to open a VXX position even in a small account like this one.

Selling credit call spread for SPX, IWM, and VXX are recorded in the “Vertical” spread type.

Thoughts for the October Report

One thing I learned this month was that never ever go against the market. The table below shows the average return of the S&P 500 over the period of about 60 years. It clearly shows the market performs well in October, November, and December.

I shouldn’t have put on a hedge knowing the market would likely move higher for the remainder of the year.

I should have ridden the market wave and don’t try to look for data that would support my decision (such as initiate a hedge when it’s totally unnecessary), and instead, digest the data in front of me and act accordingly.

I have read enough books by now knowing what I did was “confirmation bias”, and yet, it took me way too long to get out of that position. Clearly, knowing something and actually putting that knowledge into practice are two different things.

I will look for minor pullbacks for the remainder of the year and initiate positions with an expectation that the market will move higher unless the market data tells me otherwise.

Three Big Trading Mistakes I Made In 2021
Scroll to top