“Oops! I did it again”. No, I am not talking about Britney Spear’s song. I am talking about how I sold Call options again and lost money again. This time it was BAD because they were GME and BBBY Call options. I lost most of the profits I made last year.

Why do we self-sabotage? Upon doing a quick Google search, it seems there could be certain aspects of my life that I am not doing well (either consciously aware or unaware of) and that might have led me to self-sabotage. I am getting so sick and tired of this behavior so added the following three books to my reading list to learn more about what self-sabotage behavior is all about. More to come on that topic once I finish these books.

What puzzles me is that if the GME and BBBY short Call options were not included in the PNL, the Wheel strategy produced a 10% return (of the entire account) in January. There was no reason for me to take such stupendous action, yet I did it.

There are a few reasons I could think of why I short GME and BBBY. 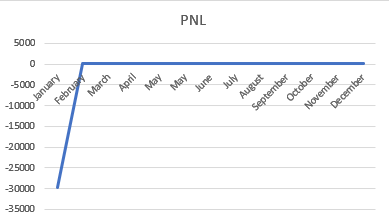 For January 2021, short Call GME and BBBY were also included in “Single”.

EOLS continues to be the top winner since November 2020. GNW remains on the list since December 2020 thanks to speculation that the merger with Oceanwide would be completed (which it did not). KNDI is a new entry and is a part of the electric vehicle-related stocks that kept popping up on the screener since late 2020.

Positions closed were opened back in late November / early December when the stock was still hovering between the $3 and $4 range. The stock price took off so now is trading close to $7. IV is still pretty high so with the right market condition (such as elevated market volatility), there could be a good entry point again. 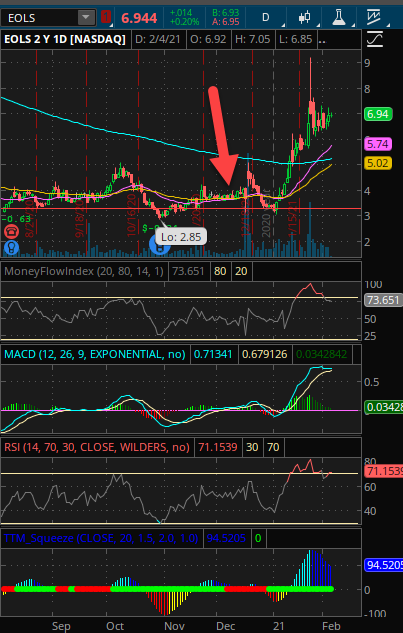 I already had some short Put positions in December but opened more at $4 strike and $3.5 strike short Put positions right before the stock price tanked at the end of December 2020. Some expired out of the money in January, which contributed to the January PNL. Also got assigned with some stocks since the stock price dropped below $4 at expiration so holding on to them until the price recovers back to $4 to get out. 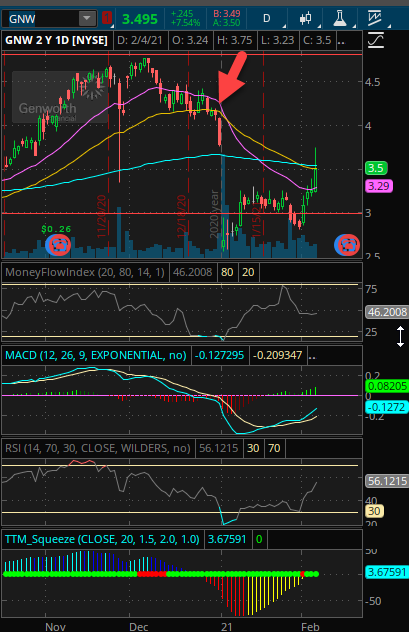 Kandi Technologies Group, Inc., through its subsidiaries, designs, develops, manufactures, and commercializes electric vehicle (EV) products and parts and off-road vehicles in the People’s Republic of China and internationally 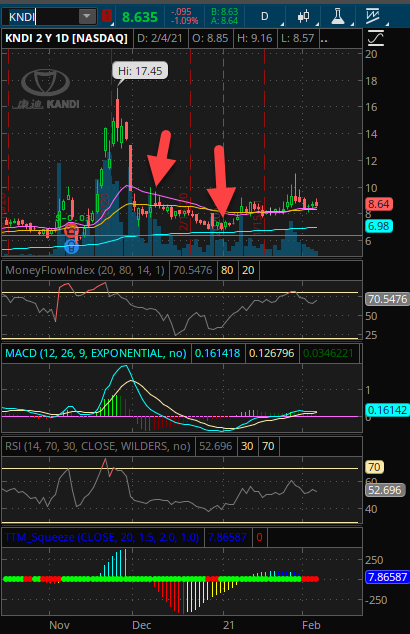 If you have been following the market lately, I believe no introduction is needed for this one. I somehow thought selling a Call option was a good idea when the stock price went up beyond $100 and dropped significantly the day prior on 1/25/2021 (red arrow). Opened a short Call position at a $200 strike when the stock was trading around $90 the next day (1/26/2021). The position was going to expire in 3 days so I was pretty confident it would not spike beyond $200.

Who could predict that the stock would climb to more than $150 the same day and went on to reach more than $300 the next day (1/27/2021). It also overlapped with the VIX spike because S&P 500 was dropping significantly on 1/27/2021 so IV for the options jumped even further and made it more expensive to buy back the open positions. Closed my positions on 1/27/2021. 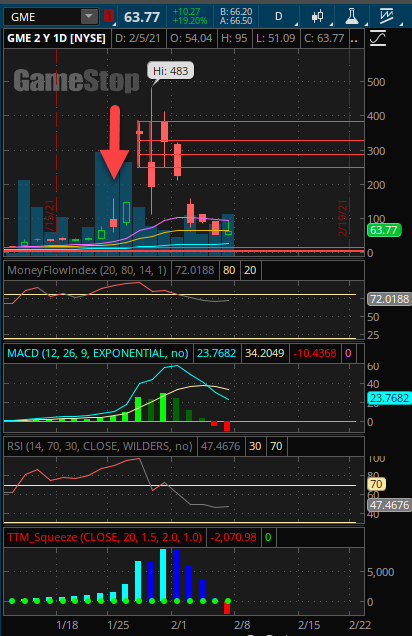 Bed Bath & Beyond was also a stock that was heavily traded around the same time GME was going crazy. It had a spike then retraced back lower the day prior to my entry (1/25/2021). Same kind of thinking as GME. Opened multiple short Call positions at $60 strike with weekly options on 1/26/2021 (red arrow). Did not think about potential loss and was just thinking how unlikely it would be for the stock to go beyond $60. Combination of a large spike in stock price and an increase in IV, it got really expensive to buy back the options. Closed my positions on 1/27/2021 on the day the stock price jumped up to $53.9 at one point. 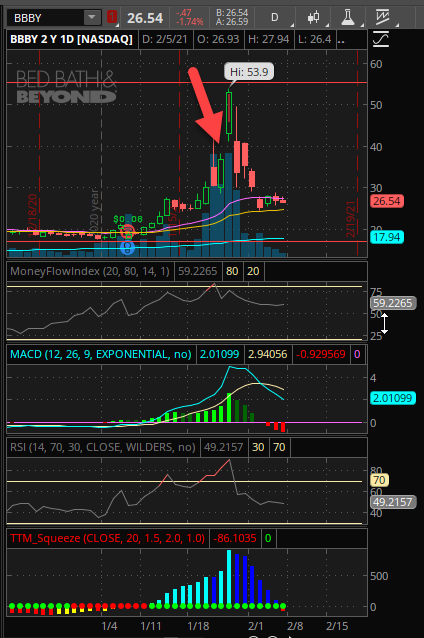 This is one of those positions that I did everything right even though I lost money. The stock price breached the support/resistance line (around $62) a few days prior to me exiting my position. My position was at a $60 strike so I gave it a few days to see if it would recover but it just kept going down so got out when it got closer to $58. The stock price ended up recovering about 2 weeks later, then started declining again. Who could have predicted that? 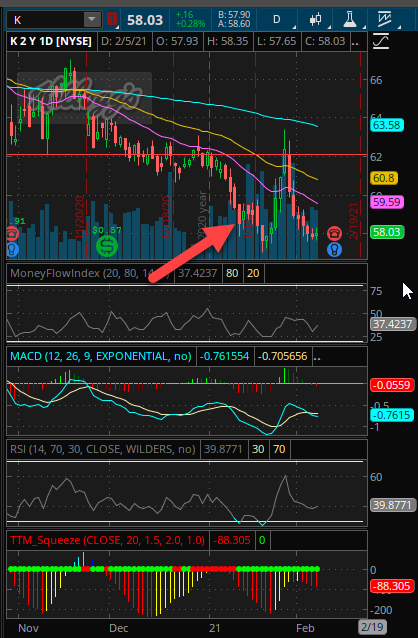 I was really upset the day I closed GME and BBBY positions but I was really surprised at how fast I recovered psychologically this time compared to so many times before when I made a bad mistake.

This experience made me realize that I am just not ready in so many aspects yet to be a successful options trader. I know success is relative. In my case, if I could produce a consistent profit from trading options, I consider it a success. Not hitting a million dollars. Not flying around with a private jet. I just want to be a consistently profitable options trader.

TAK | A Stock Idea For The Wheel Strategy
Scroll to top