It has been almost one year since I decided to post the first options trading monthly report. My initial thought was to do this for one year to see how much I could improve my trading by sharing some aspects of my options trade results publically. To my surprise, it actually helped me tremendously, and it seems I have also managed to help some people as well based on the comments, survey results, and emails I got from some of the readers.

Before we get into the usual monthly report stuff, I want to review the one-year mark performance with you. The graph below shows my account size over the 12 months period. As you can see I started off pretty small as I was still experimenting with various strategies initially.

The green arrows are additional deposits into the account. The red arrow is the stupid / totally unnecessary GME and BBBY trades.

Below is a brief summary of what happened.

In case you are interested in reviewing the activities in more detail, take a look at the monthly reports here.

To sum it up, the Wheel strategy works pretty well. It provides a good win rate (>90%) and by allocating the right amount into each trade and taking the Kelly Criterion into consideration, the data shows there is a clear edge in trading this strategy.

I continued to read up on “self-sabotage” related books and finished “Stop Doing That Sh*t: End Self-Sabotage and Demand Your Life Back (Unfu*k Yourself series)“. It had some good insights and actionable suggestions. In case you did not read my January report, I did a really stupid trade with GME and BBBY but this was not the first time for me. I have done it with Overstock stock way back around 2016, then with VXX in 2018. These trades had no apparent upside or edge, yet I traded them anyway.

March was another good month overall. Since I have a margin account, I leveraged the account close to 300% and managed to get around a 10% return of the total account value in one month. One of the main reasons that I feel comfortable leveraging the account so much is because of position sizing. It limits downside risk and forces me to look for more opportunities rather than just keep trading the same set of stocks. My positions were allocated across roughly 30 to 50 underlying stocks. The number fluctuates because many positions were opened and closed during the period.

In case you are interested in knowing what kinds of stocks that I trade the Wheel strategy, I post them once in a while in the trading strategies and ideas section and also on the Alphapursuits YouTube channel. 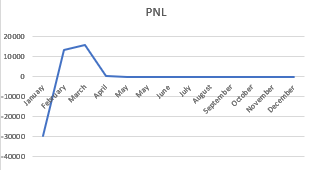 As the world continues to recover from COVID-19, the market will likely trend higher. This is good news for people who trade the Wheel strategy because a portfolio for the Wheel strategy has a positive beta value (positively correlates to how the market moves). I personally think we are at the beginning of a market cycle so if everything goes well, the market should perform well in the next few years. Of course, there would be some volatilities and those could actually be good times to capture great opportunities.

In other words, the plan is to keep doing what I do, listen and watch the market closely until it says “stop doing what you are doing”.

Moving forward, instead of sharing reports on a margin account, I am thinking to share reports of a non-margin account. Based on some of the feedback I got, it seems a lot of people actually trade Cash Secured Put (CSP) rather than using a margin account to trade the Wheel strategy.

I personally have a retirement account that would only allow me to trade CSP and I have been trading the Wheel Strategy on that account as well. The account was opened in March 2020 with around $3300 and the Wheel strategy returned about 40% in one year to around $4800 account value as of April 1st, 2021 (graph below). While the return is not as spectacular as a margin account, it is still a very respectable return.

Some might argue that S&P 500 did return around 50% for the same period so the Wheel strategy did not outperform the market. This is why I think it would be interesting to see how this account would perform against the market in the next 12 months.

The CSP Wheel strategy vs S&P 500. Which would win in the long run? Let’s find out.

How To Manage Losing Trades For The Wheel Strategy? – Video
Scroll to top