This is the second month I managed to achieve a more than 10% return in one month by focusing on trading the Wheel Strategy.

Ever since I started spending 80% of my energy on the Wheel Strategy (the remaining 20% goes to trading VXX or UVXY), PNL has improved substantially. Prior to start focusing on the Wheel Strategy, I was doing a lot of directional trades by selling Call or Put Credit Spreads, or non-directional trades by selling Iron Condor, Strangle, Straddle, etc. None of those worked very well, even though I did pick up a lot of trading tools/methodologies that I use today by going through the journey.

As you know, November was the US presidential election month so there was a lot of volatility. This has helped to find stock candidates for the Wheel Strategy easier compared to December. Market volatility was also relatively high for October so I must point out that it will likely be more difficult to repeat a 10% monthly return in the coming months until volatility picks up again. In anticipation of the declining volatility in the coming months, I have started focusing a bit more on trading VXX so I will share more about that in the coming months.

The graph below shows how dramatic the PNL has changed since I started focusing on the Wheel Strategy. I really started focusing on it around June 2020. It started taking off in July. Having said that, so far it’s about +$4000 for December but I made a huge mistake losing about -$3000 on paper. It’s still too early to tell how December will turn out so check back in January to find out more. 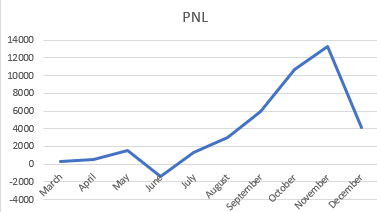 NOTE: How I Record PNL

NOTE on Spread Type: When transactions are exported from Thinkorswim the spread type is already assigned by the platform. “Single” means a single leg option. Selling Put is considered “Single”. Selling Call is also considered “Single”. Since I only sell Call when a stock is assigned, the system assigned the Call selling as “Single”.  If a position is opened as a Covered Call (buying stock and selling a Call option at the same time), the system would assign it as a “Covered”.

I am very glad to see different three top winners for this month. If you look back on my earlier reports, GNW had been the bread and butter for many months until October.

To break that reliance on just one stock, I spent some time coming up with an options screening process and managed to find more underlying stocks to trade the Wheel Strategy.

According to finviz.com the company makes and sells a product (Jeuveau) that competes with BOTOX.

Evolus, Inc., a performance beauty company, provides medical aesthetic products for physicians and their patients in the United States. It offers Jeuveau, a proprietary 900 kilodalton purified botulinum toxin type A formulation for the temporary improvement in the appearance of moderate to severe glabellar lines in adults. The company was founded in 2012 and is headquartered in Newport Beach, California.

According to this article, The company is awaiting a decision from the ITC concerning the use of Jeuveau in the US. As a result, it had and still has a very high implied volatility. I opened positions back in October when IV % was close to the recent high (image below).

This was one of those pure luck moment that I was at the right place at the right time. It appeared on my option scan when the company was awaiting a top-line data readout for the NurOwn® Phase 3 trial in ALS, expected by the end of November.

I actually posted a blog post about this when I found out about the stock.

The image below shows the price drop (Yellow arrow) and when the IV percentile was really high (Red arrow) before the Phase 3 result.

I opened multiple positions when the stock price was hovering around $4 (Red arrow) but eventually got assigned when the price dropped below $3. I held on to the stock and kept selling Covered Call and got out as soon as it hit $4.

The cumulated options premium sold turned out to be a pretty nice amount even though it took several months to accumulate.

This is one of those positions that I did everything right, yet things went wrong. The technical analysis showed that while the price was trending down a bit, indicators were showing it might go up. It was during summertime and COVID-19 cases were trending down world wide. Yet, the price just kept going down from then. I did keep the appropriate position size so I did not add more as the price went down or hit the bottom. I just kept selling Covered Call and waited.

The fundamental analysis showed that the company was valued much higher than the stock price at the time, so I did not panic sell my positions.

This was one of those trades that made me realize utilizing what I have learned with technical and fundamental analysis could be really useful. While the analysis could be wrong, my trade decision would be based on the research rather than my emotion.

Another thing to point out is that some people might wonder why I did not hold on to the stock as the price has soared to over $7 since then. The reason for that is, holding on to the stock and expecting the price to go up is not part of my strategy. While some people focus on speculating on stocks that might take off and focusing on selling Covered Call on them, that is not the way I trade the Wheel Strategy.

By defining what I do and don’t for the style of the Wheel Strategy that I would trade, it helps me physiologically as well because I don’t regret selling COTY at $4 AT ALL even though it eventually increased all the way up to $7. 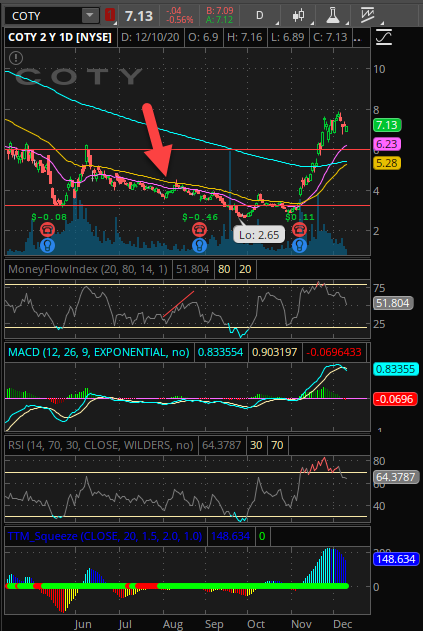 Interestingly enough, there was no losing trade recorded in November.

While November was one of the best months in my trading history, my immediate concern is the lower volatility in the market. The market has shifted to risk-off mode ever since the Coronavirus vaccine news from Pfizer and a few other companies were announced. I wonder how the Wheel Strategy will look like in a low market volatility environment.

Have you been trading the Wheel strategy for a long time? Would love to hear your experience, especially what it would be like trading this strategy in a low market volatility environment.

Also, if there some items that you are interested in seeing or want me to dive deeper into it, let me know by leaving a comment.