I am very excited to share the results of my September trades, which mostly consist of the Wheel strategy. After a few months of a steady increase in PNL,  September was the biggest of them all so far. It more than doubled from August!

Part of the reason it was such a huge jump is due to how I record PNL. I got assigned for different underlying stocks several months ago and have been selling Covered call on them. For a few of them, at last, the stock price returned to the exit point that would allow me to get out at break-even. For example, I would sell a $3 strike Naked Put, get assigned, hold the stock, and keep selling Covered Call strike price at $3. So essentially the Covered Call got assigned and I sold the stock. So the large jump in PNL is because I could finally close out these positions that I got assigned a few months ago and recorded the profit/loss in September.

Another point worth noting is that I sold some SPY Call credit spread. I opened a few such positions to hedge against the market drop using Beta weighting. I know I have mentioned in the previous monthly report that I am not good at trading spreads so I was not planning on trading them, but these SPY Credit Call spread trades are based on Beta weighting my account against SPX. More details can be found in the risk management video below so check it out.

Trading GNW options is my bread and butter right now. I have been following this stock for several years by now so I feel comfortable taking a larger risk on this stock. I know I break one of my own fundamental rules of “allocating only a limited amount of capital per underlying”, which is why I am getting such disproportionate profit compared to the other two top winners. The implied volatility also spiked a few times during September, which boosted option premium.

I know my allocation for GNW is way beyond ideal allocation size by any measure, but it reminds me of a chapter in The Psychology of Money by Morgan Housel that I recently read. The chapter talked about how Warren Buffett took a large position in Geico which went against his own advice in concentrating too much capital on one investment. However, that actually helped him to get where he is today.

I don’t think GNW is equivalent to Geico,  but the reason to allocate a large capital is just so compelling that it’s difficult not to do it! 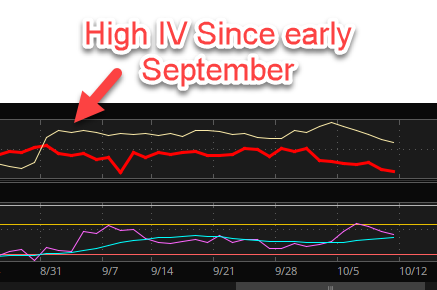 AAL stock had a large dip below $12 in September followed by a gradual increase back to $13 in early October. I jumped in at the right time to profit from the dip. The strike price was chosen based on the support/resistance level. Nothing fancy. I like to keep it simple whenever possible. 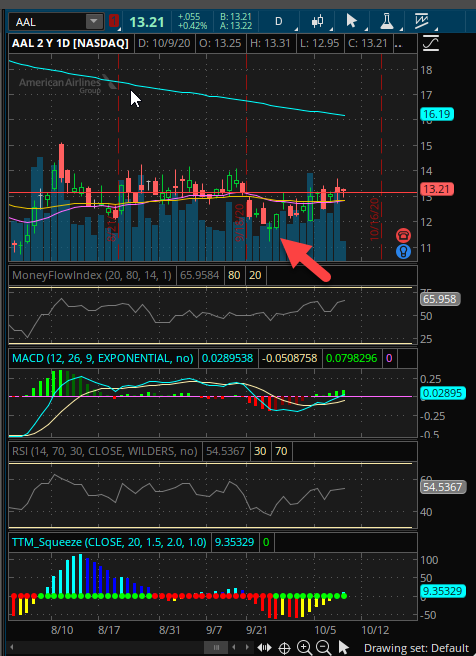 These were Credit Call spread opened to get some negative delta for the portfolio based on SPX beta weighting. As I mentioned in the Wheel risk management video above, my entire account has a net positive delta when beta weighted against the market (SPX) because of the Wheel strategy (Shorting PUT and Selling Covered Call). To counteract that in case the market drops, I sold some SPY Credit Call.

There were no losers in September because the short PUT that I got assigned do not get counted as a loss until if they are sold (closed) below the entry point. In other words, there were some paper losses due to the stock price went below the Put strike price, so now I am holding stocks with a price that is lower than my entry point, but since they are not sold yet, they are not counted as a loss.

Cumulative PNL for 2020 (March to the first week of October)

I asked on a Reddit forum about a typical return on the Wheel strategy. I was hoping to get an average number that I could benchmark. However, most people told me that it’s pointless to ask such a question because the answer people give would either be inflated by not counting actual loss, or even if the answer is a high return, everyone has their own trading style that it’s almost impossible to replicate.

I agree with that feedback and it is true that everyone has their own trading style. I think the key is to understand the principle of a strategy, then modify it according to your own personality and trading style. Maybe we, ourselves are the best benchmark. I from tomorrow should be a better version of me from today.

One pattern I started noticing is that the trades that I placed when there are no obvious opportunities, they tend to be losers. I tend to come up with some kind of fluffy reasonings to back up those trades without considering the hard numbers, trends, or signals.

I should stop trying so hard looking for trades and let them come to me instead. It seems the less work I do, the more profitable it becomes.

What Is The Wheel Strategy And Why I Love It?
Scroll to top