As you know I love the Wheel Strategy. It’s simple, easy to manage, and most of all surprisingly profitable, especially if you use a margin account.

Having said that, just like many other traders, I have tendencies to “try new things”, or feel overconfident and just do self-sabotage stuff out of nowhere.

My hope is that by sharing these mistakes (self-public shaming) and writing them down on a blog post, it would allow me to digest these mistakes and avoid doing them again.

I know we still have a month and a half left for 2021 so I am hopeful that I won’t make any more big mistakes for the remainder of the year. Otherwise, I will need to update this post. I guess you can check back in a couple of months to see what happens 🙂

Before we get into each mistake, let me set the stage to show you how profitable the Wheel Strategy could be.

How Profitable is The Wheel Strategy?

This result is based on a roughly $100K account with portfolio margin enabled. As of November 11th, the PNL is about 17% ROI, but this includes one of the big mistakes I made trading Meme stocks as you will find out in a bit.

So by excluding that big mistake (since it’s not the Wheel Strategy trade anyways), ROI could potentially be about 60% ROI.

As I am writing this I am crying inside. WHY OH WHY did I trade those Meme stocks 🙁

In case you are interested, I have been posting the monthly report of a small non-margin account and you can see how the Wheel Strategy could perform pretty well even without a margin account.

Side note: The PNL and win/loss record mostly consist of the Wheel Strategy but also contains a few other types of trades such as selling naked calls and selling spreads.

Yep. I traded meme stocks GME (Game Stop) and BBBY (Bed Bath & Beyond) and got burned bad. Most of the $47,495 losses that happened in January were because of that.

As you might know, back in January 2021, GME had a huge surge, and the Implied Volatility of its options was really high. On January 26, after GME surged substantially the day before on 25th, I thought the short squeeze was over and the stock price wouldn’t go any higher.

For some reason, I thought selling naked call was a good idea because it would allow me to sell the high IV value. I chose the $200 strike because it was unlikely the stock price would go any higher than that.

The trade record below shows the aftermath. I got out the next day when it shoot up close to $400.

The same happened with the BBBY trades as well. Selling naked call at $60 strike and thought there was no way the stock price would get close to that. It shot up close to it the next day, I got scared and took the loss. If I had held it, all the BBBY positions would have been profitable.

2) Not Monitoring The Market Sentiment

I kept forgetting about monitoring the movement of major indexes.

My PNL had a huge loss in May, July, and August, which coincided with a significant dip in Russell 2000 (RUT). This makes sense as many of my holdings at the time were small-cap stocks because I primarily look for stocks with high IV and High IV Percentiles, which tend to be smaller company stocks.

I started paying more attention to how indexes are moving and did much better in September and October when RUT dropped again. 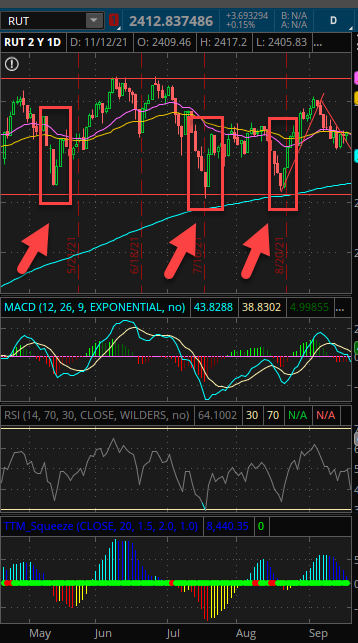 3) Hedging without a Confirmation Signals and a Plan of Exit

The large loss in November was due to shorting SPX and IWM as hedge positions after the large market drop in October. SPX took off and gapped up a few times with insignificant volume at the time.  I started putting hedge positions based on this observation instead of waiting for confirmation signals (double top, market start moving sideways, MACD, RSI, etc).

I also did not have a plan on when to close out the position. I knew a Fed meeting was happening in early November so was hoping it would become a catalyst for the market to drop. In the end, it moved to the upside and I waited until the next day to get out rather than just getting out of the positions right after the meeting.

In essence, I missed three critical checkpoints. I should have just closed the positions right after one of these happened. 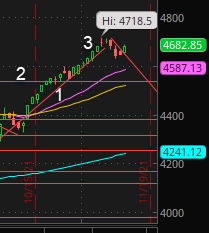 The win/loss ratio indicates I have never done well with directional trades. I should be extra careful moving forward and wait for confirmation signals.

This was my first year trading full-time and primarily focusing on the Wheel Strategy. I have traded many other ways over the years, and at last, I have managed to simplify the process and narrow down my focus.

After making more than 500 trades this year so far, I came to realize that trading is almost like being an athlete. I need to constantly take care of my mind and body, which would allow me to perform well. While I only shared three big mistakes in this post, I made numerous smaller mistakes throughout the year, including not taking care of myself and hurting my low back in the summer. It’s really interesting to see how the large losses correlated with those times when I was not feeling well, or overwhelmed with something in my life.

I think most people only talk about technical aspects of trading and not enough about physical and psychological aspects of things. I look forward to sharing some findings on these topics in the upcoming posts as I learn more about them.