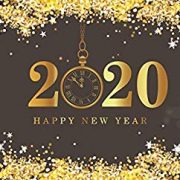 After testing out the gap strategy with SPX, which did not work as well as I hoped for, I have decided to get back to the basics. Trade what I know works the best.

I keep breaking my own rules by trading unfamiliar stocks and I feel like I am just going in a circle. I know this is human nature so I need to find a way to live with it and try to not do it again. Let me summarize what I tried in 2019 to showcase that.

Started out with the usual volatility trade by waiting for a spike in VIX, then sell VXX and/or UVXY. This strategy went really well. Since VIX stayed low for some time, I also did selling VXX Put strategy here and there in anticipation of a VIX spike.

I also tried the gap strategy on SPX and GDXJ, which had mixed results. I knew to rely on just one signal was a bad idea, yet I believed in it so much that I decided to test it out with substantial capital anyways. What a bad, BAD idea.

So, after testing out so many different strategies over the years, I have decided to get back to the basics and stick to one strategy in 2020. Trade only VXX and UVXY whenever VIX spikes. Even with this one simple strategy, there is so much I could do disregard to which ways the market moves. Below is the action plan.

Pretty straight forward and nothing tricky about this step. Based on the historical VIX data (2014 – 2018) that I obtained previously, VIX was 55% of the time higher than 15 at closing. You might think if VIX is so high most of the time, there are not that much VIX spikes that we can trade.

However, when broken it down by year, it becomes clear that during the financial crisis around 2008 – 2010, VIX was higher than 15 throughout those 3 years, and continued to be high for the next 2 years after that period (table below).

This shows using a fixed VIX price (such as 15) as an entry point is probably not ideal. I would need to keep an eye on the baseline level at the time and decide on when to enter.

Another critical item to consider is how much capital to deploy and when. Looking at the VIX level in 2008 – 2010, it seems VIX could spike and stay at a level unimaginable, which means jumping in all in one go is not ideal. I also need to think about rolling the position if VIX stays high. Since there is; 1) a contango effect for VXX and UVXY; 2) VIX always reverts back to the mean; as long as I keep rolling it out and wait for VIX to come back down on earth we should be fine.

What I am thinking is to enter positions incrementally until 30% of the total capital, and leave the rest for rolling the positions in case it happens.

Once entered the positions, just wait until VIX calms down. If VIX continues to advance and the extrinsic value of the Short Call option diminishes, I may consider rolling it to a Debit Put Spread instead to avoid an early option assignment. An early assignment has happened to me before and it got really stressful really quickly. I am not going through that again.

Instead of just close out the Credit Call Spread once VIX comes back down, roll it over to a Debit Put Spread to capture the remaining value.

Let me demonstrate this with the OnDemand feature in Thinkorswim.

Let’s say I entered a 25/26 Credit Call Spread on Oct 8th, 2019 when VIX spiked up for 0.39 credit. The required capital to open this position is $610 without considering commissions (Red arrow in the chart).

So the trade sequence is as follows (Yellow arrows in the table). 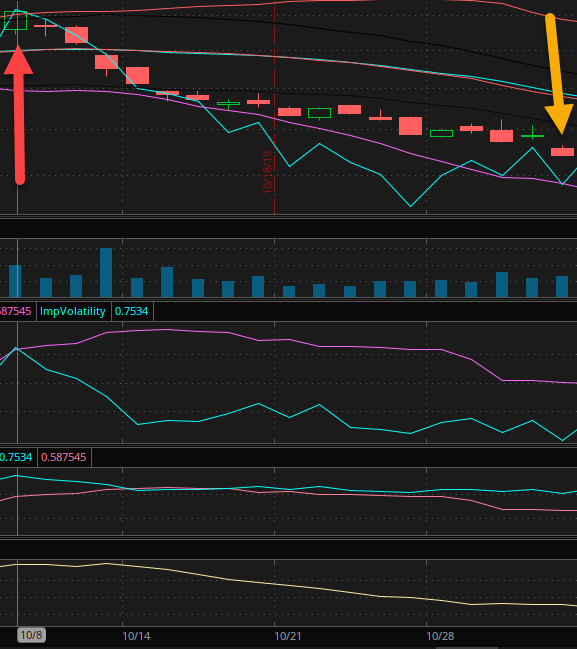 One thing to note is that rolling to the Debit Put Spread strategy is based on an assumption that VIX will not be high at option expiration or contango effect is going to continue so that the price of VXX or UVXY will be much lower at the expiration. If the market condition is volatile a prolonged backwardation could occur. In such a condition it would be better to just close the position and wait for the next VIX spike.

However, the beauty of this strategy is that we are only risking the $300 profit that we have already made to capture the remaining potential profit. The original capital is already freed up for the next VIX spike in case it happens.

What do you think? Is this a viable strategy? Let me know your thoughts in the comment section below. 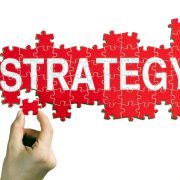 Options Trading Strategies – What Am I Trying To Achieve? 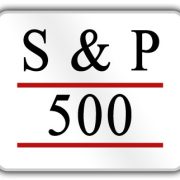 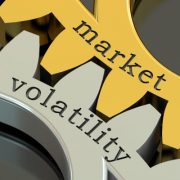 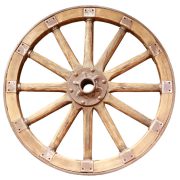 What Is The Wheel Strategy And Why I Love It?