“Will VIX go down in December?” This question has been circulating in my head since early November, especially when VIX spiked up to above 20 around November 13th again despite it started heading down south a few days prior.

I have open positions for December expiration options shorting VXX and UVXY so my hope is for the VIX to go down at least closer to 15 or even lower.

Let’s take a look at some VIX data

Historically, VIX is known to go down in December because the market is not as active so the hedging effect is not as high. To find out how significant the drop is, I did a quick analysis on the historical VIX data shown in the following video.

In which they talk about the SKEW index and VVIX along with other facts that indicate VIX will likely go lower in the near future.

According to the CBOE website SKEW index definition is as follow. It is also known as a “Black Swan index”.

The crash of October 1987 sensitized investors to the potential for stock market crashes and forever changed their view of S&P 500® returns. Investors now realize that S&P 500 tail risk – the risk of outlier returns two or more standard deviations below the mean – is significantly greater than under a lognormal distribution. The Cboe SKEW Index (“SKEW”) is an index derived from the price of S&P 500 tail risk. Similar to VIX®, the price of S&P 500 tail risk is calculated from the prices of S&P 500 out-of-the-money options. SKEW typically ranges from 100 to 150. A SKEW value of 100 means that the perceived distribution of S&P 500 log-returns is normal, and the probability of outlier returns is therefore negligible. As SKEW rises above 100, the left tail of the S&P 500 distribution acquires more weight, and the probabilities of outlier returns become more significant. One can estimate these probabilities from the value of SKEW. Since an increase in perceived tail risk increases the relative demand for low strike puts, increases in SKEW also correspond to an overall steepening of the curve of implied volatilities, familiar to option traders as the “skew”.

VVIX is essentially volatility of VIX, so we can use it to gauge which way VIX is likely to move.

In addition to these two, I have also found VIX9D (9day volatility index) to be a useful indicator. Based on my observation, a lot of time Backwardation happens when VIX9D is higher than VIX.

When plotted VIX, VVIX and VIX9D together, they do correlate together and the baseline of VVIX could potentially be used as an early indicator of which ways VIX will likely move. In fact, the articles by Finomgroup.com mentioned earlier show that the recent spike in VIX (November) was not the same as the one in October because of the VVIX level.

I have also plotted the chart below showing the level of VVIX (blue) in November is substantially lower comparing the two previous VIX peaks in October. 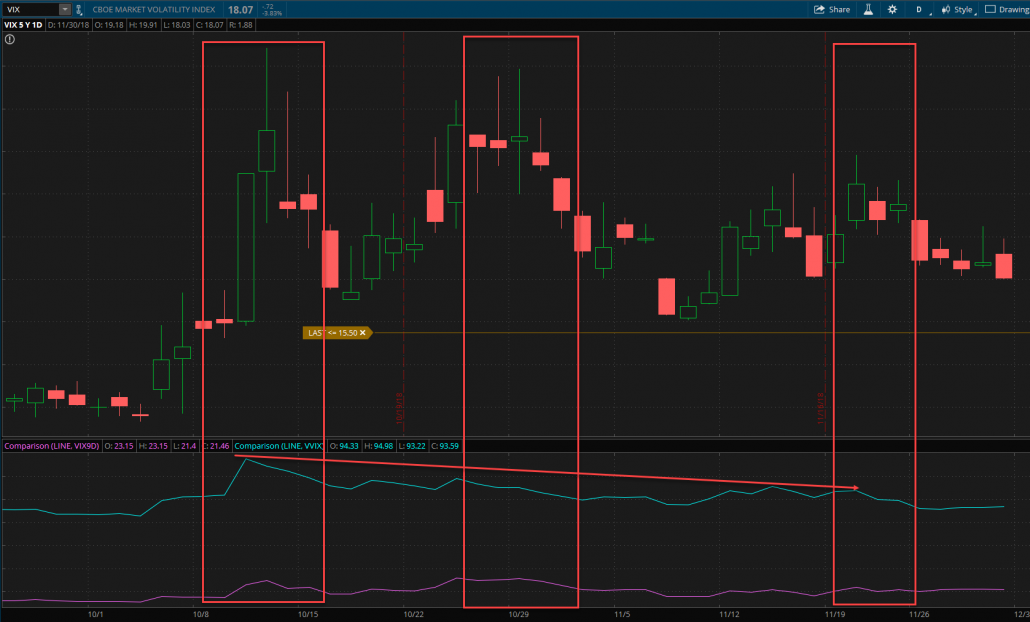 Considering the positive news that just came out of the G-20 summit, VIX will likely continue to decline a bit more.

The question is now “how much more” will it decline. For that, we will have to wait and see…..

What VXXB Options Strategy I Am Trading In 2019
0 replies